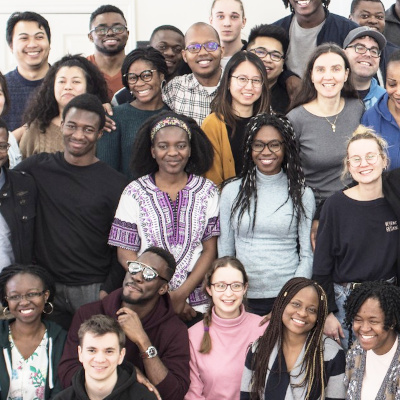 We want to see students, on French speaking campuses:

To put this virtuous circle in place, our activities hinge on 4 pillars:

What do we do?

The heart of the GBU activities is a small group of students who meet together to encourage each other to live out the Christian faith on their campus: by studying the Bible together, by encouraging each other to put it into practise, by praying and worshiping God and by seeking to witness about their faith to those around them.  These activities are directed by student leaders, supervised by a member of the GBUC team.

In the province of Quebec, the GBUC is present on the French university and cegep campuses in Montreal, Trois-Rivières, Rouyn-Noranda, Chicoutimi, Saint-Jérôme, Longueuil, and Quebec City.

What do we believe?

The GBUC adhere to the doctrinal basis of IFES:

Where do the GBUC come from?

Originally, universities were founded with the goal of better understanding God and his creation. Today, however, a student who enters university or cegep will be faced with the challenge of living out their faith in the context of their campus: they will be challenged intellectually, ethically and in their witness.

This same challenge showed itself starting in 1877 in England.  Despite the disapproval of the university authorities, some evangelical Protestant Christian students met together to pray, to study the Bible and to share their faith.  Then, these groups of Christian students moved out among numerous campuses across England, starting the inter-varsity (between colleges) movement.

Then, this interdenominational evangelical movement spread out into the whole world, in particular in France in 1901 (GBU), in Canada in 1928 (IVCF) and in French-speaking Quebec in 1965 (GBUC). The French-speaking national movements are called “Groupes Bibliques Universitaires” (GBU).  They are grouped together within an international federation, IFES (International Fellowship of Evangelical Students). Today, IFES counts as members more than 170 national movements which encourage hundreds of thousands of students to live out and to share the Gospel of Jesus Christ on their campuses.

Our vision is to see students built into communities of disciples, transformed by the gospel and impacting the university, the church and society for the glory of Christ.(IFES Mission statement)